, /PRNewswire/ --  (NYSE: RBLX) and  (NASDAQ: WMG) today announced the Twenty One Pilots Concert Experience, a pioneering interactive virtual concert powered by the latest technology. The fully immersive performance begins inside on th at , kicking off the -winning Fueled By Ramen/Elektra artist's sold out Takeøver Tour. 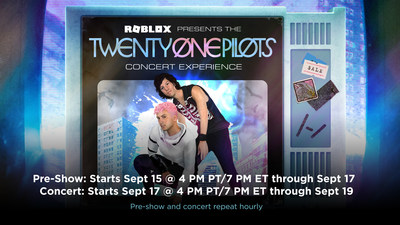 The high-fidelity experience will feature the first-ever dynamic setlist dictated by fans in real-time; metaverse-spanning pre-concert quests involving some of most popular experiences that also feature custom portals that will transport users into the pre-concert venue; exclusive custom designed virtual merchandise, and much more. Fans can access the experience and join the pre-show festivities beginning today by visiting the Twenty One Pilots event page. New users will need to create an account to enter the concert venue.

"Twenty One Pilots is a band that has spent their entire career figuring out how to reach the most people possible," said the band's longtime Creative Director . "From selling out the small room and moving to the big venue next door, to now launching a virtual experience with for millions of users, the goal has always been the same. The team has made an effort every step of the way to honor the band's fans, its lore, and history to make sure this experience aligns with what people can expect from a show."

Designed in close collaboration with the band and Eshleman, the event aligns with Twenty One Pilots' fan-first philosophy, bringing this experience to fans worldwide. The five-song set will feature a combination of hit songs as well as new material from their 2021 album, Scaled and Icy.

, Co-President, , said: "Tyler and Josh are two of the most unapologetically bold, forward-thinking artists I've ever had the pleasure of working with. Their commitment to connecting with their fans in new and creative ways is unparalleled, and I'm always amazed at how Mark continually finds ways to execute their imaginative vision. Roblox is a perfect partner in delivering another unique and exciting new way for fans to experience the world of Twenty One Pilots."

, Global Head of Music, , said: "We are taking virtual concerts to the next level with our Twenty One Pilots virtual concert experience. We wanted to make it truly interactive and participatory for the fans, for the band, and for our broader developer community. Fans will be able to decide the order of the songs that they hear by choosing with their friends. They will be able to interact with the environment in creative ways becoming part of the show, and Tyler and Josh will participate in a live chat with fans after the virtual concert. This is what is built for, bringing people together to interact in new and exciting ways and we are just scratching the surface of what's possible."

Oana Ruxandra, & Executive Vice President, Business Development, , said: "The Twenty One Pilots Concert Experience is a completely new format of interactive music experiences on . It is non-linear, it is choose-your-own-path, and it is the very reason why we have such a close partnership with . Our goal is to continue to build ever-evolving ways for our artists and fans to meet, connect and create something authentic together."

The first-of-its-kind experience will include:

Fans can replay performances at the top of each hour through at .

About
(NYSE: RBLX) mission is to build a human co-experience platform that enables shared experiences among billions of users. Every day, tens of millions of people around the world have fun with friends as they explore millions of immersive digital experiences. All of these experiences are built by the community, made up of over eight million creators. We believe in building a safe, civil, and diverse community—one that inspires and fosters creativity and positive relationships between people around the world. For more information, please visit corp.roblox.com.

About
With a legacy extending back over 200 years, (WMG) today brings together artists, songwriters, and entrepreneurs that are moving entertainment culture across the globe. Operating in more than 70 countries through a network of affiliates and licensees, WMG's Recorded Music division includes renowned labels such as Asylum, , Big Beat, Canvasback, Elektra, Erato, First Night, Fueled by Ramen, Nonesuch, Parlophone, Reprise, Rhino, Roadrunner, Sire, Spinnin', , Warner Classics and . WMG's music publishing arm, , has a catalog of over 1 million copyrights spanning every musical genre, from the standards of the Great American Songbook to the biggest hits of the 21st century. is also home to , the independent artist and label services company, as well as consumer brands such as Songkick, the live music app; EMP, the merchandise e-tailer; and UPROXX, the youth culture destination. Follow WMG on Instagram, Twitter, LinkedIn, and Facebook.

About
was launched in 2018 as a stand-alone music company within . Its roots extend back to 1950, when launched the iconic Elektra label in his college dorm room. Today, that same entrepreneurial, independent spirit is the driving force behind each of the unique labels that make up the core of the : Elektra, Fueled By Ramen, and Roadrunner. The company's adventurous, eclectic roster includes culture-defining artists such as , Coheed and , Fitz and the Tantrums, Gojira, The Highwomen, KALEO, Korn, Panic! At The Disco, Paramore, Slipknot, Tones And I, Twenty One Pilots, and others.

About Twenty One Pilots
GRAMMY® Award-winning Twenty One Pilots quietly emerged as one of the most successful bands of the 21st century and redefined the sound of a generation. After billions of streams and dozens of multi-Platinum certifications around the world, the history-making duo—Tyler Joseph and Josh Dun—ascended to a creative and critical high watermark on their new full-length album, Scaled And Icy. The album debuted at No. 1 on Billboard's Top "Rock Albums" and "Alternative Albums" charts, while landing at No. 3 on the "Billboard 200," marking the biggest opening week for a rock album in 2021. Among a collection of anthems, Scaled And Icy spawned "Shy Away," which spent eight consecutive weeks at #1 at Alternative Radio, and "Saturday" which just climbed to #1 at Alternative Radio marking the band's 9th #1 single at the format. Scaled And Icy follows Twenty One Pilots' 2018 Platinum certified album TRENCH, which features the platinum singles: "Chlorine," "My Blood," and the GRAMMY® Award-nominated "Jumpsuit."  The album graced spots on "Best of" year-end lists by Billboard, KERRANG!, , and —who placed it at #1. Formed in 2009, the guys grinded towards this moment following the mainstream breakout of 2015's BLURRYFACE. Certified quadruple-platinum in the , it was declared the first album ever to have every one of its songs certified Gold or Platinum by the RIAA, and garnered a GRAMMY® Award for the Diamond certified "Stressed Out."  In 2019 Twenty One Pilots announced that their 2013 LP Vessel achieved the same Gold & Platinum milestone with every individual track from the album receiving Gold, Platinum or Multi-Platinum certification from the RIAA, making the duo the first artist / group with two albums to reach this landmark achievement.

and the logo are among the registered and unregistered trademarks of in and other countries. © 2021 . All rights reserved.